With food rationed and increasingly scarce as the occupation continued, the resolve of islanders was truly tested.

Most remained honest and generous, sharing what little they had with family and friends. But others were driven to desperation, on the lookout for anything they could find and prepared to bend the rules to get by.

As a result, supplies had to be carefully guarded, particularly on farms. Some of the starving forced workers escaped from their camps at night, and anything not locked up might disappear before morning. In the last few months of the war even the German troops were searching for food, and would break into properties after dark. 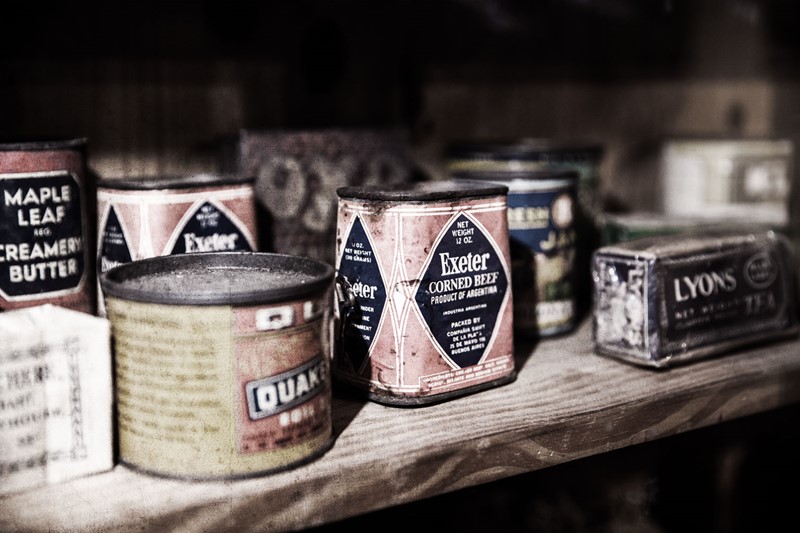 Some animals were brought indoors for the night, with chickens put to roost in the attic. Goats and pigs could be hidden in 'secret' concealed rooms in outbuildings. But despite farmers' best efforts, there are hundreds of stories of animals being stolen at night.

One farmer discovered his chickens had been taken when he found only their heads left on the ground in the morning. Another found an emptied container which had been used to milk his cow in the middle of the night! A much-loved pet goat, valued for its milk, disappeared from its stable one night; its entrails were found in a nearby field where it had been butchered.

Such stories of theft are plentiful, but people weren't always stealing to feed themselves. Some were obtaining goods to sell on the black market. There were numerous house robberies during the war years, and food was the usual target.

As the occupation dragged on, a thriving black market developed, particularly for pork. Any animals slaughtered officially at the abattoir were taken by the Germans, and the only pork officially available to islanders was a poor quality import from France. The States tried to eliminate the unofficial slaughter of animals, but they fought a losing battle, with plenty of people willing to risk buying locally-reared pork and beef on the black market.

The black market also traded goods smuggled in from France, with heavy demand resulting in extremely high prices, even for 'basic' items like sugar and tea. People justified the black market on the basis that it provided food for locals which would otherwise be taken for much less money by the Germans.

Some Germans were also black marketeers, including officers. Whether German or local, people caught trading on the black market faced severe penalties.

Imprisonment wasn't the only risk for those trading on the black market. A man working near the town of St Helier was asked to deliver a load of firewood to a prosperous family who lived on the coast road in Grouville, about 3 miles away. With no other means of transport, he set off from town on foot with the fully loaded wheelbarrow he was given.

On arrival, he was surprised to find that there was already a plentiful supply of wood in the store, and wondered why he had been asked to deliver more. He investigated the loaded wheelbarrow, and found that his load was not just firewood - it concealed several items of black market goods!

Angry at being used in this way, he decided to take revenge. Thinking that others could benefit more than this wealthy household, he distributed everything he had found to families in greater need. Of course, nothing could be said about the 'loss' without those responsible incriminating themselves!