German forces imposed a huge number of orders and restrictions on Islanders during the Occupation. They banned all uniformed organisations, which even included the Girl Guides!

As the Occupation progressed, the local community became adept at hoodwinking the German authorities, finding ingenious ways of getting around regulations whenever they could. 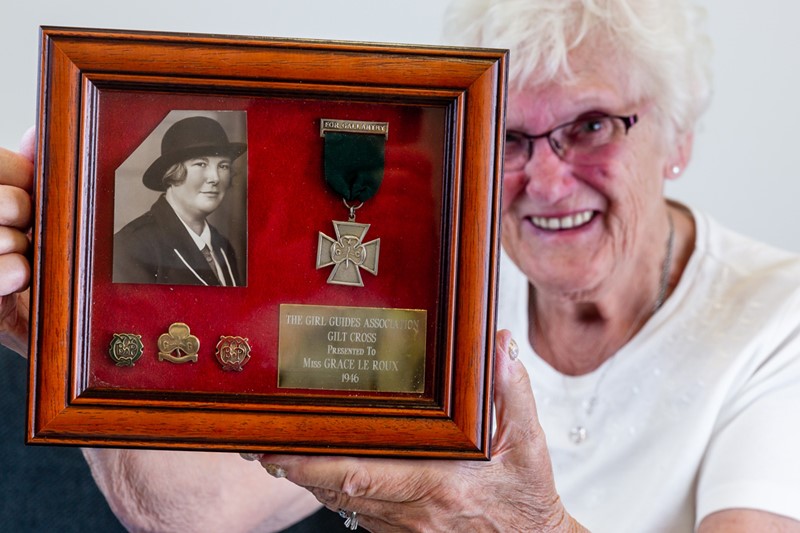 In a courageous move which would have brought severe retribution had she been discovered, Grace Le Roux, Captain of the 5th St Mark’s Guide Company in St Helier, allowed a group of Girl Guides to meet in her house.

The Guides kept a low profile by not wearing their uniforms, but secretly expressed their allegiance by pinning their badges under their coat collars! They were told to arrive in twos or threes, with some using the front door and some the back door, to avoid drawing attention from the Germans who occupied a nearby hotel as their Headquarters.

Keeping calm and carrying on

There were obvious limitations to their activities, but a Union Jack was hidden under a bed and used for enrolments. Handicrafts and other useful skills were employed for fund-raising; most importantly the activities helped to keep their spirits up, and created hope in their hearts. Similar activities were carried out by the Girl Guide companies at St Aubin and Gorey. It is remarkable that the secret was so well kept by these youngsters!

This courage and patriotism was evident on Liberation Day, when one of the Guides, Mary Horton, proudly raised the Union Jack on St Helier Town Church to mark the end of the Occupation.

In 1945 Miss Le Roux was presented with a national Guiding award, The Gilt Cross, by the Island’s Lieutenant Governor in recognition of her outstanding services during these difficult times.

The Girl Guides from the Wimbledon district made a flag as a sign of their friendship and admiration for the bravery of the Jersey Guides when they heard about their meetings during the war. One thousand five hundred girls all put one stitch in to the Wimbledon flag and brought it over to Jersey in 1946. The flag was used in all ceremonial occasions until 1994 when it became too fragile. It has been on display at Guide Headquarters at Greve d’Azette ever since.

Girl Guides’ archivist, Margaret Hawkins, said: ‘I’ve always been fascinated by the stories of the Girl Guides during the war. Self-sufficiency and caring for others are part of the whole ethos of Guiding and their actions during the war encapsulate this completely. It’s lovely to be able to re-tell these stories and hopefully it will inspire young girls today.’

So next time you see a Girl Guide, remember the sense of adventure, determination and friendship that enabled Guides to overcome the tough years of the Occupation, and which continues to inspire the organisation today.

Learn more about life in occupied Jersey at the Jersey War Tunnels, with fascinating stories from people who experienced life under German occupation, told first hand or passed down the generations in local families