Jersey's war cemetery is located in Howard Davis Park, opposite St Luke’s Church. It is a fitting location, as the park was established by a locally-born businessman to commemorate his son, Howard Davis, who died in the Battle of the Somme during the First World War.

The cemetery was created in November 1943 “as a resting place for the bodies of Members of the Allied Forces recovered within the Bailiwick during the Second World War." It was consecrated by the Dean of Jersey, the head of the Church of England in Jersey.

Uniquely, each of the graves is marked by an oak cross rather than the distinctive white stone headstones seen in so many other war cemeteries. The crosses were created by Jersey craftsmen following the Liberation in 1945 from an oak tree presented by Lady Stewart, a local woman who had lost her son in the First World War. 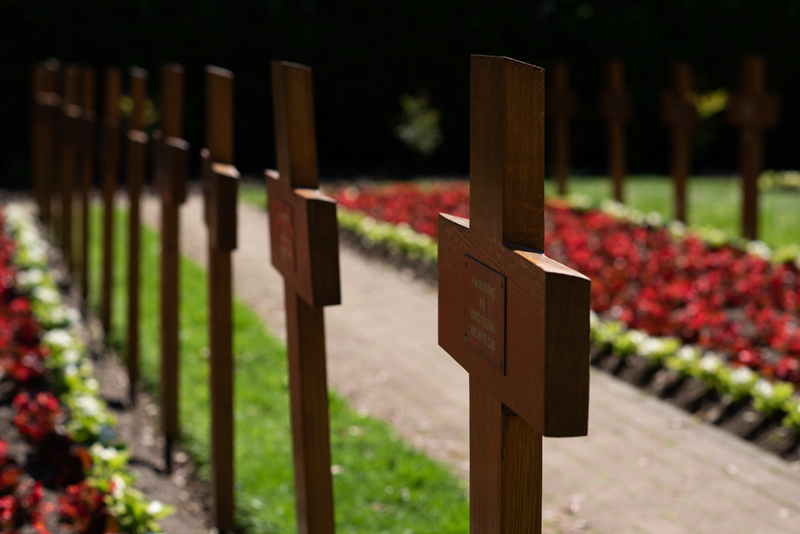 "Something personal to the Island"

After WWII the Commonwealth War Graves Commission (CWGC) planned to replace the crosses with the usual white headstones, but local people and the Jersey authorities asked that the original wooden crosses be kept.

“I feel that this cemetery is more than a small war cemetery. It is to the Islanders who lived here during the years of the German occupation an expression of something which they were able to do in spite of German interference when all other means of helping their country were denied to them.

"As such, they cherish it, it’s something personal to the Island, and maintain it with a care which I know would be appreciated by the relatives of those who lie there. As such, I feel that it should be preserved in the form in which it was originally laid out.”

The Commission agreed, and in 1955 formally approved that the wooden crosses could stay - and they still remain today.

The first men laid to rest in the cemetery were two RAF servicemen whose bodies were found in June 1943. Initially buried in another cemetery, they were brought here for re-burial with military honours. Islanders attended and stood silently as the German forces carried out the solemn ceremonies, including a salute fired by the German air force, the Luftwaffe. Several American airmen were to follow as the war took its toll.

Also laid to rest in the cemetery are the bodies of servicemen washed up in Jersey following ‘Operation Tunnel’, naval action off the Brittany coast on the night of 22-23 October 1943. Two British vessels - the cruiser HMS Charybdis and the destroyer HMS Limbourne - were torpedoed and sunk by the Munsterland, a German vessel escorted by six destroyers. Jersey residents had seen star shells in the night sky and were aware that action had taken place.

In total, 41 burials were carried out at the War Cemetery. Today, it remains a beautiful and fitting memorial to those who lost their lives.

More recently, the Channel Islands’ Occupation Society planted a row of silver birch trees alongside the burial ground. Each year, the cemetery is the focus for memorial ceremonies on Liberation Day, 9 May; during Battle of Britain Week in September; and again on Remembrance Day, 11 November.